By Clinton News Sep 30, 2019 No Comments on Lifetime Developments’ Panda Markham is Presented to Community

Lifetime Developments has had its eye on a prime 5.8-acre site adjacent to Highway 7 in Markham for some time. Recently they had an opportunity to present their vision for the site – dubbed “Panda Markham” – to the public.

In a meeting at the Milken Community Centre, the company discussed their master plan for the site, unveiled the latest renderings and fielded questions from Markham residents curious as to the impact such a project will have on the fabric of their community. 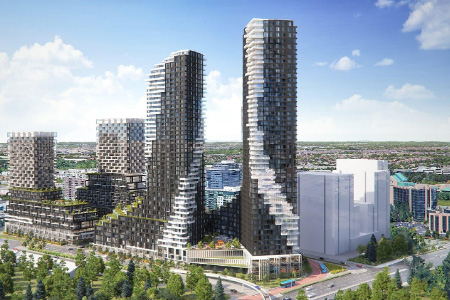 The discussion was lively and covered everything from the number of units and the impact it will have on local infrastructure, to the height of the towers, the suite mixture and more.

Members of the Markham community were joined by Ward 8 Councillor Isa Lee.

While the development team was represented by Brian Brown, principal at Lifetime, and the architect David Pontarini from Hariri Pontarini Architects.

Residents queried the development team on the extent to which the project will impact local transit lines.

Some were concerned local mass transit might be overwhelmed by an influx of so many residents in such a concentrated area. Kate Cooper, from planning firm Bousfield’s, addressed these concerns by stating that the development team were intent on optimizing existing mass transit infrastructure and that projected increases on the VIVA busways, for instance, should be well within acceptable limits.

There were also plenty of questions and plenty of praise for the proposed look of the project. Most residents seemed impressed with the design Hariri Pontarini put forth.

The master plan calls for five residential towers containing some 2,200 luxury units. The towers will range from 28 to 48 stories and envelope a mixture of one, two, and three-bedroom suites that should appeal to everyone from single professionals to budding families.

The attendees at the meeting also seemed generally satisfied with the way the architects have handled both massing and exterior design features.

Mr. Pontarini stressed that every effort has been made to mitigate the visual impact of such a large project.

The various towers have been set at oblique angles to one another while the cladding materials present a variety of textures and colors that keep the eye moving. The towers also rise from their podiums in graceful arcs that help lessen the visual impact of the mass.

When addressing questions about the location Lifetime’s Brown emphasized the desirability of the Warden Avenue site and stated his belief that the proposed project will “bring new attention to one of the most desirable locations in the Greater Toronto Area.”

He also noted the demand for new housing units in the city and expressed confidence that Panda Markham will become an integral part of the fabric of the community.

With Markham’s population expected to increase by more than 30% over the next 15 years, Panda Markham is more than just another condo development.

It’s destined to play a vital role in allowing the once sleepy community to make a seamless transition to bustling suburban center. Lifetime Development’s unwavering passion for real estate development and their extensive portfolio are both testaments to their competence.

To know more about one of their most famous developments, Liberty Market Condos, please click here.